Mayors get on board with commuters

Home/Media Releases/Mayors get on board with commuters
Previous Next

Mayors get on board with commuters

Six Mayors from eastern Melbourne are leading the charge for increased Federal public transport spending, signing a joint letter to the Labor, Liberal and Greens leaders at Huntingdale Railway Station this morning.

The mayors called on all parties to support funding for the Melbourne Metro project, which is critical if the much needed extensions of rail to Doncaster, Rowville and capacity improvements to Dandenong, Glen Waverley and Belgrave/Lilydale are ever to come to fruition.

In the letter to Kevin Rudd, Tony Abbott and Christine Milne, the mayors said “Commuters Count this Federal Election as they are the lifeblood of our economy and communities. Gridlock and congestion wastes time and money and can be solved through action on major transport infrastructure.

“That is why we urge you to support improved public transport and a stronger economic future for the eastern suburbs by committing the Commonwealth to funding transport infrastructure on merit.’’

In addition to their own message, the mayors also urged commuters to share their views and improvements that they would like to see by sending photos and comments to the hash tag #commuterscount on Twitter and liking the Eastern Transport Coalition’s Commuters Count Facebook page. 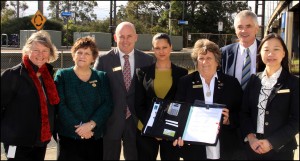